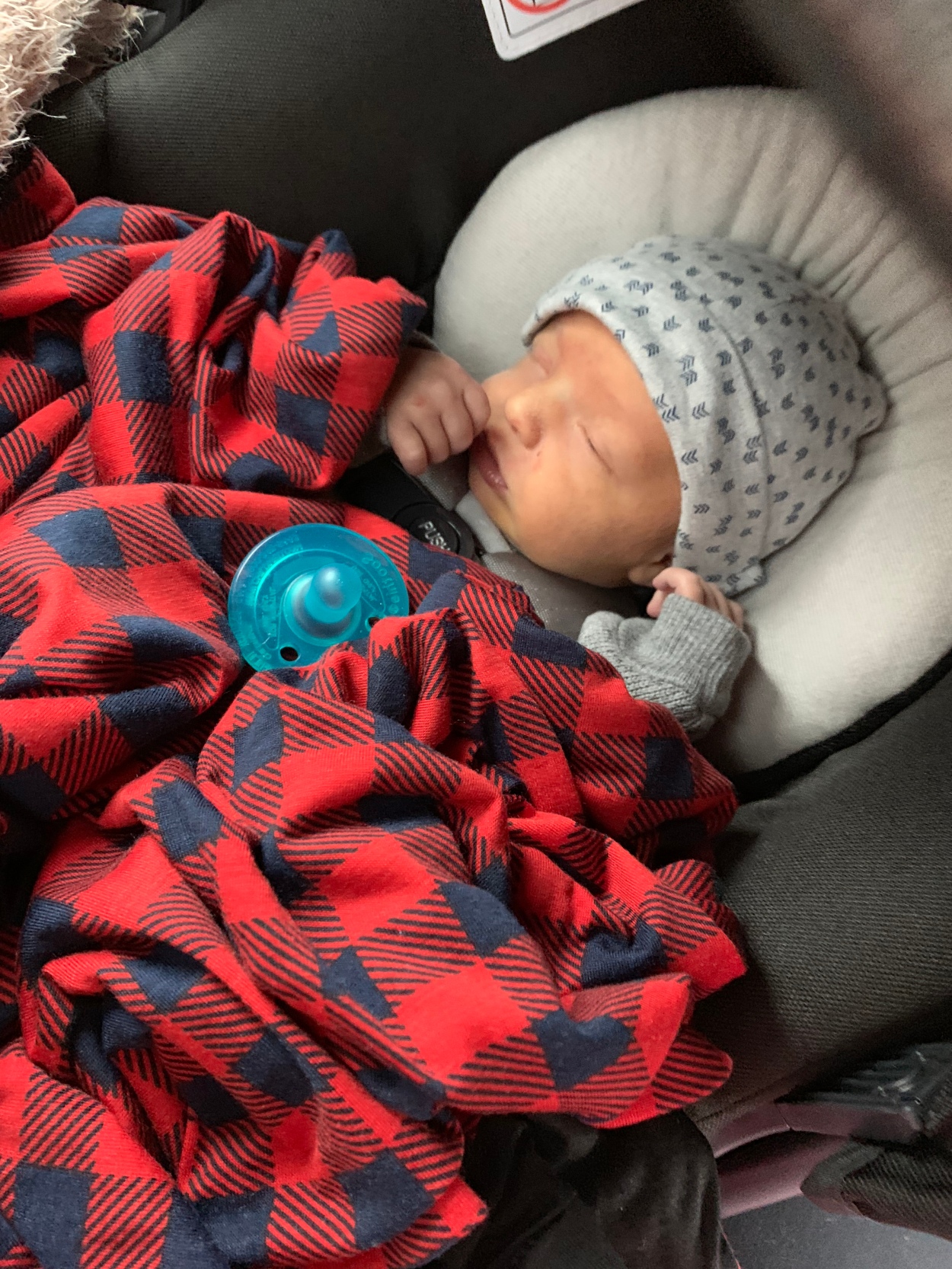 Everything seems a blur, I remember the nurse showed me my baby, and off she went. I was so tired but wanted, needed him with me. Riley followed her back and they did his examination. He was retracting and thought that he may not have pallet in his mouth so they called his doctor (seriously LOVE his doctor) and told him to come check him out. With a bult of lightening & fire he ran through those doors like someone was dying. His shoes were untied, but he ran right to McQuaid and looked at him and he was perfect. (I have a video of him examining McQuaid and seen that his shoes were untied. He must have been sleeping. Im so grateful for him!)

McQuaid had a pallet and had no problem sucking. He was perfect. He was retracting some so that required oxygen. His poor little lungs just weren’t quite ready yet. They hooked him up to the CPAP machine to help get those lungs bigger, faster.

Finally, they were done stapling me and started cleaning everything up. Lifting me onto my hospital bed and pushing me to the NICU to see my baby boy.

Just as I suspected, he was beautiful. 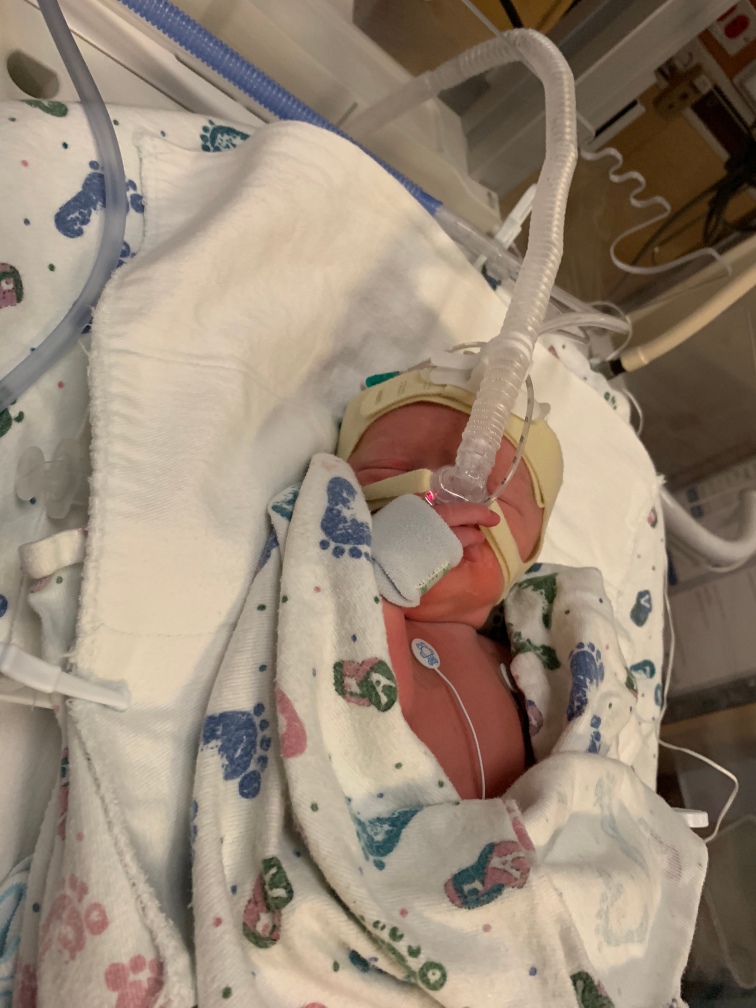 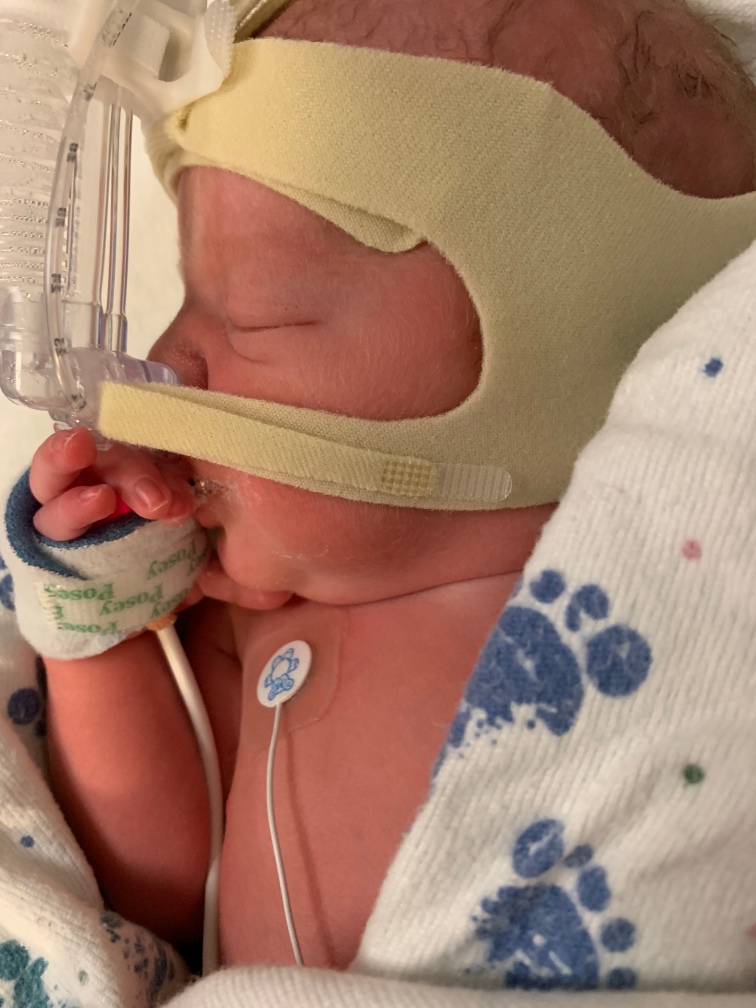 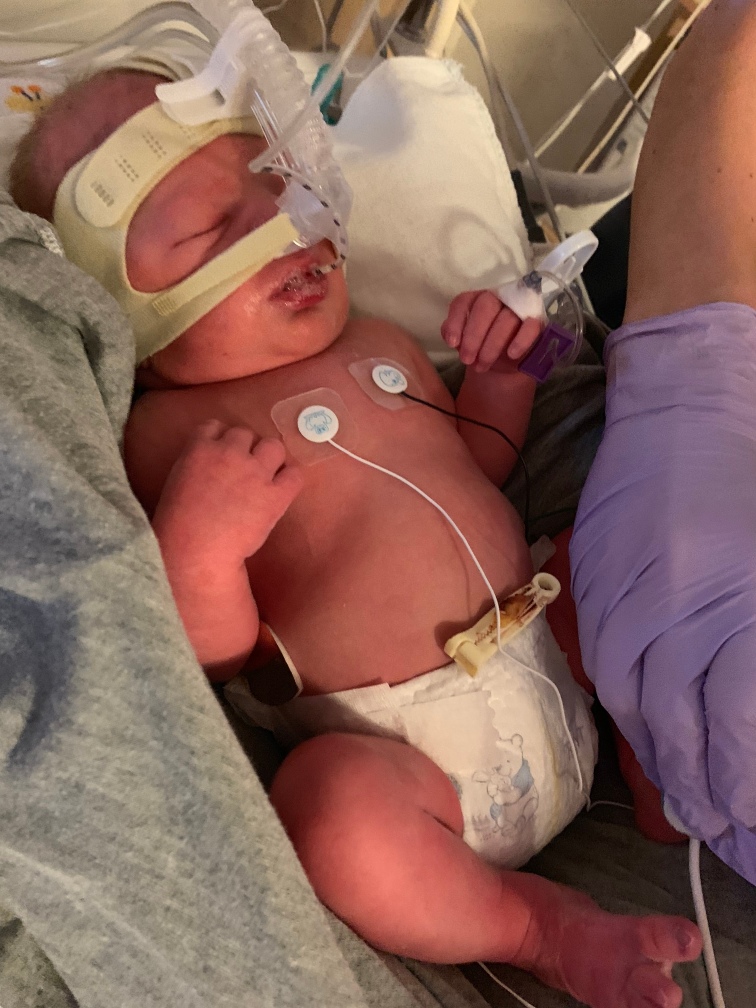 I couldn’t believe this BIG baby was just inside me.

He was on CPAP for a day an a half, and I wasn’t able to hold him till that day. Those are the hardest moments. Not being able to hold & love your sweet baby after birth. I have now experienced that three times. 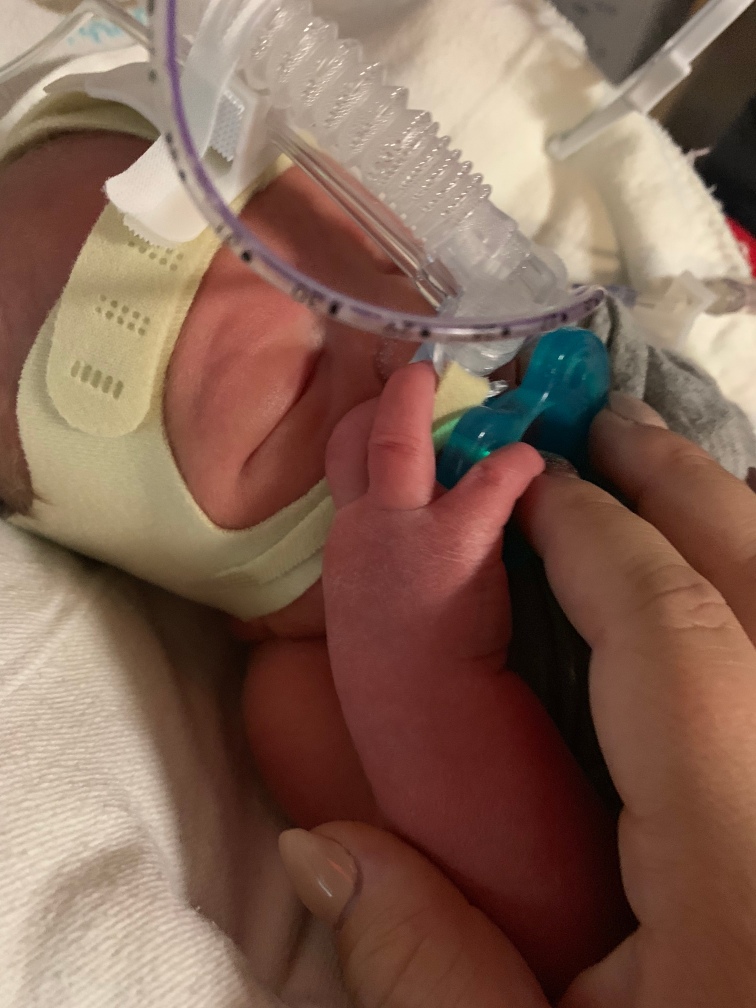 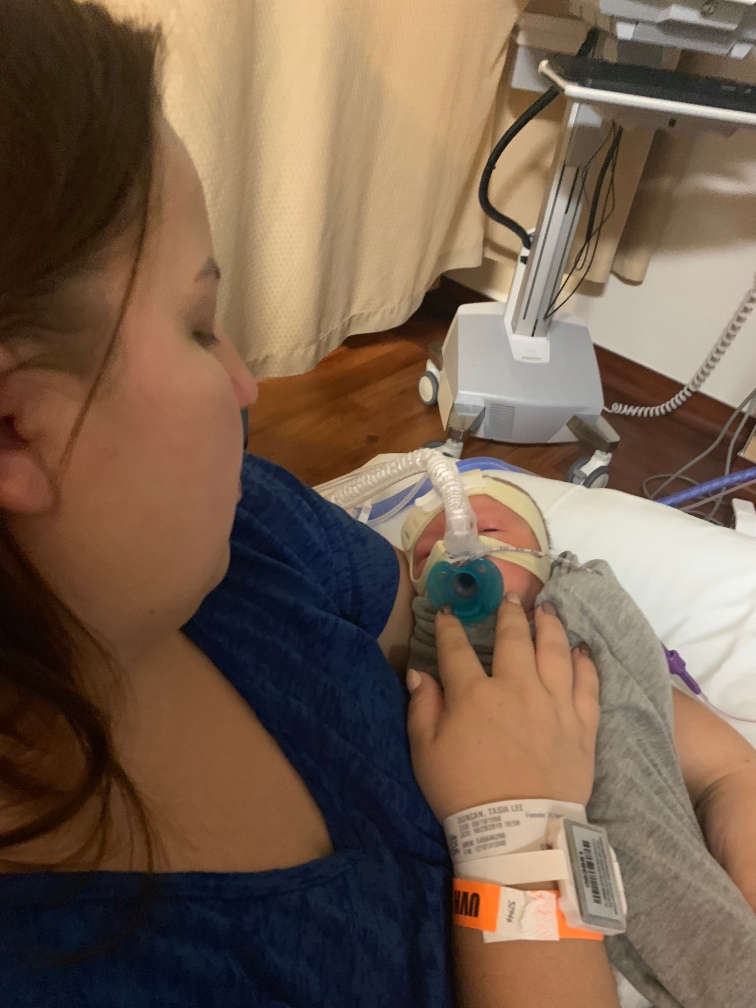 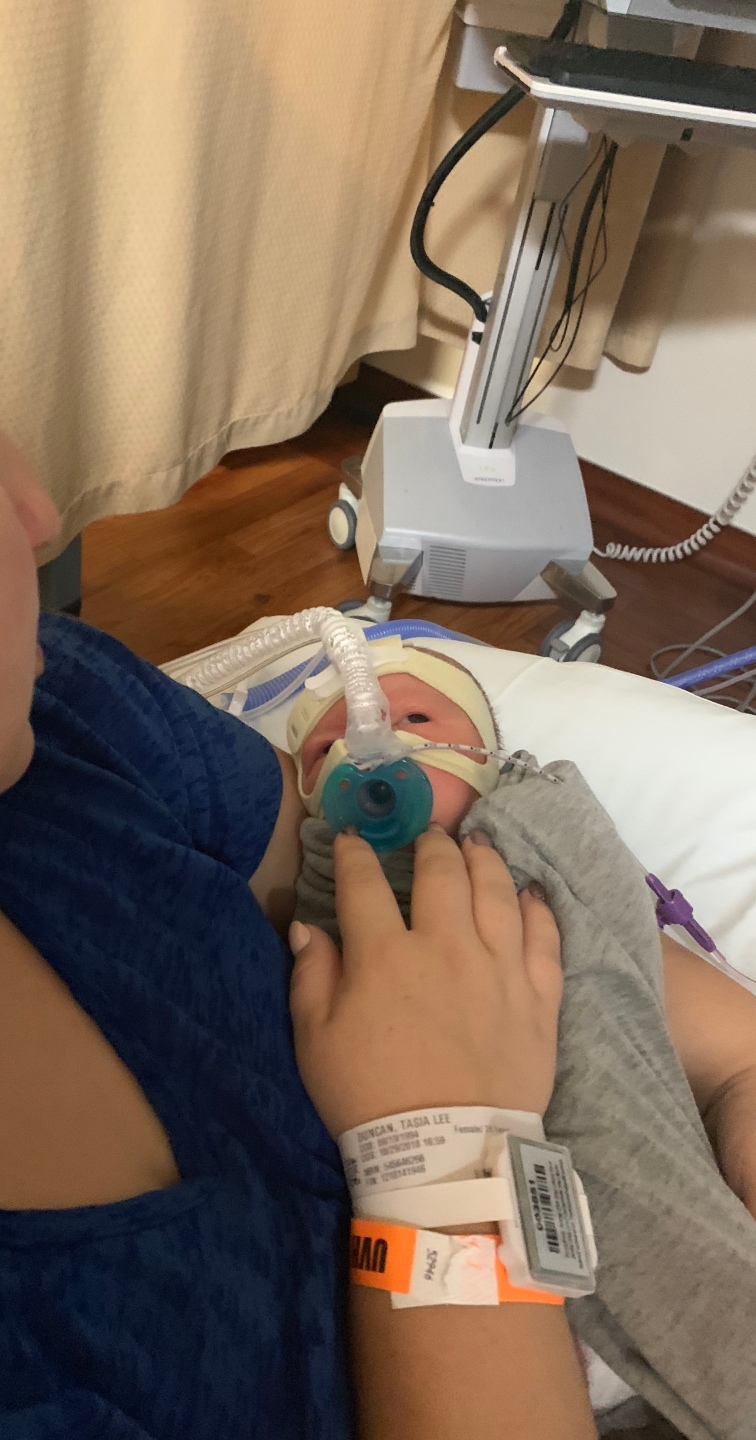 I remember Riley went to check on the baby while I was resting & recovering from my c section (getting in and out of bed is not fun, nor easy) and he came back and told me they did a ‘trial’ run to see if he could breathe on his own & he could! That made my whole day. I shot out of bed so I could see him. I was so proud. One step closer to going home! 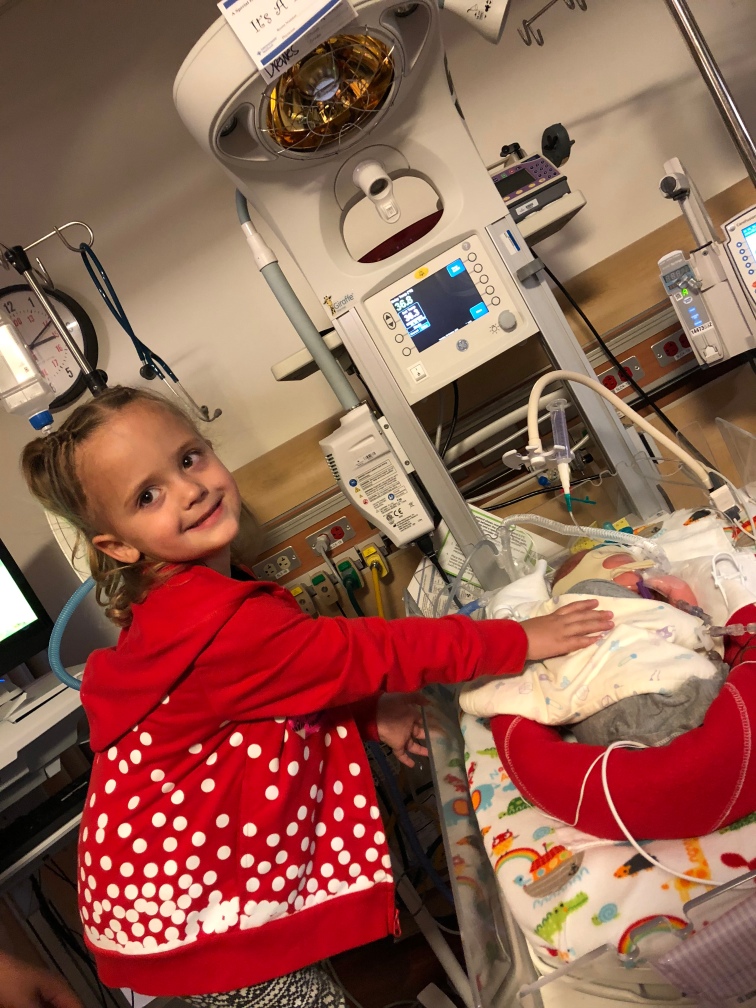 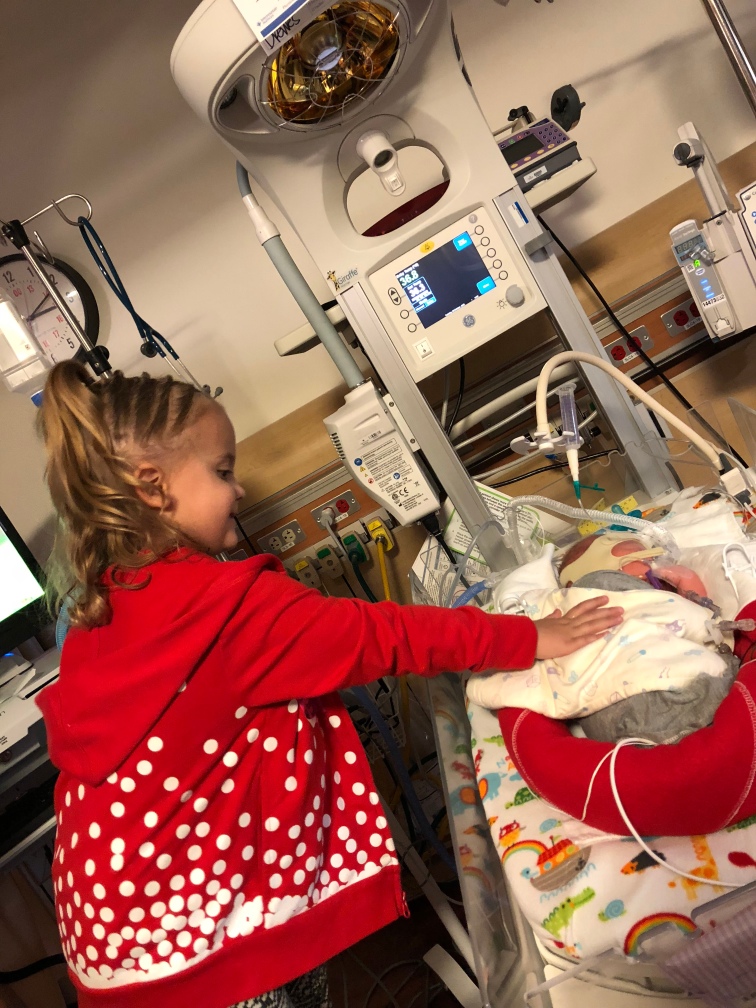 Big sister came to visit, she was so smitten! Oh my gosh she did NOT want to leave his side. It was so sweet. She grinned ear to ear and wanted to keep touching him.

Such a different experience than before. If you remember the day Hayven came to see Holland she was terrified. She loved her baby sister but she must have known something was going to happen. It was to weird.

I had McQuaid Monday (did you know all my babies were born on a Monday?? Crazy.) and my insurance covered us to stay till Friday, at this point we didn’t have anywhere to stay so we suffered in that hospital bed till friday.

On Wednesday, the nurse practitioner came into my room after rounds to let us know that McQuaid is doing awesome & should be able to come home Friday. Which worked out perfectly since we weren’t gonna be discharged till then.

Well, Thursday night rolls around and McQuaid has a desat. His oxygen dropped way low while he was laying in his bed sucking on his binky. The nurse ran to him and he was blue. She tried for some time to stimulate him but nothing worked. She grabbed the oxygen and put it on him and he was fine.

When babies have a desat like this, its the NICUs policy they have to stay another five days just to rule anything out. Especially because this was so random & out of the blue.

I get discharged & they have a room for us in the parents side of the NICU and the nurse practitioner meets us there to let us know that McQuaid wont be going home till at least Wednesday now because of his episode. She told me that she will be gone all weekend but if the other practitioner thinks he’s ready to go home before then, then thats okay. But plan for Wednesday.

I started crying. I have a daughter at home. Her birthday is coming up. Im not there to take care of her. Im solely relying on family to care for her & get her to & from school while they all have jobs & work.

This isnt how its suppose to be.

One of McQuaids nurses noticed that when he’s just laying in his bed relaxing his heart rate would drop from the 90/100s to the 70s but it would pick right back up.

As she was mentioning this, all I could think is, oh great another set back. He has some sort of heart issue.

They’ve ran a million tests on him, blood work & xrays & he was perfect. Poor boy got poked every single day. His poor foot was covered in holes from the needles.

He was eating so good, nursing & breast milk through a bottle. He took them both like a champ. So he was able to get the IVs removed. 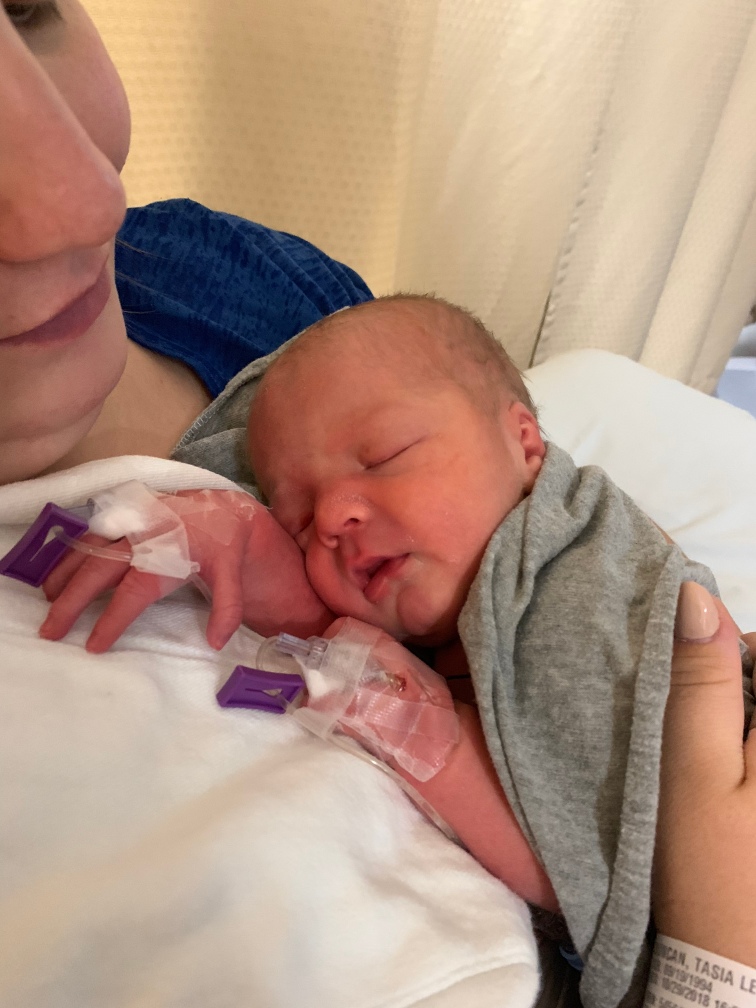 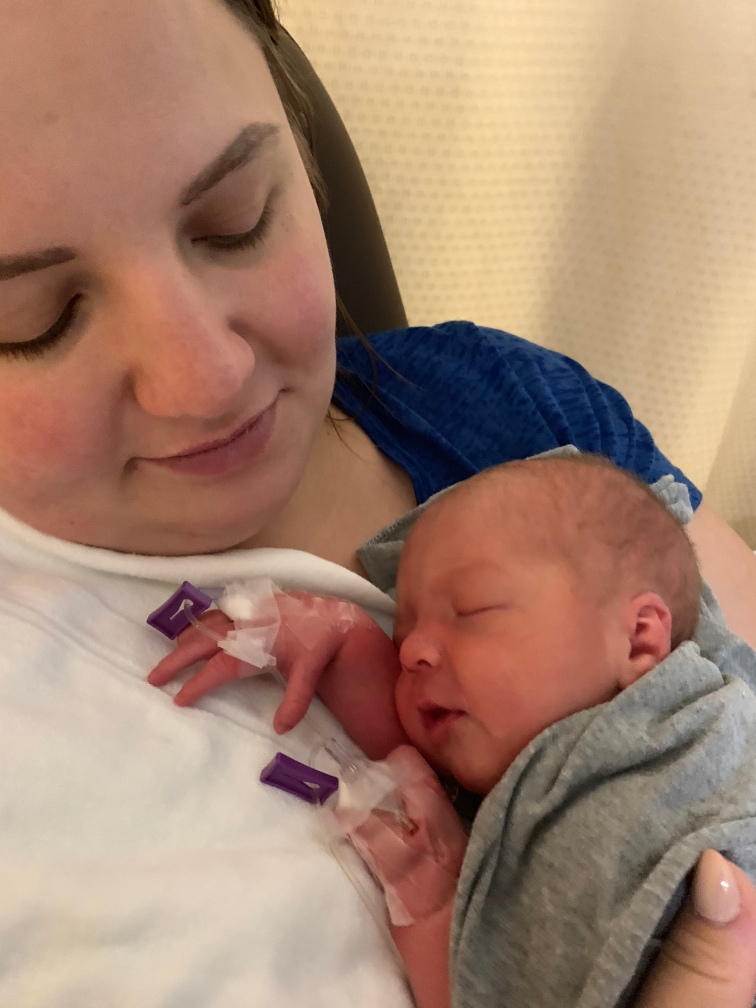 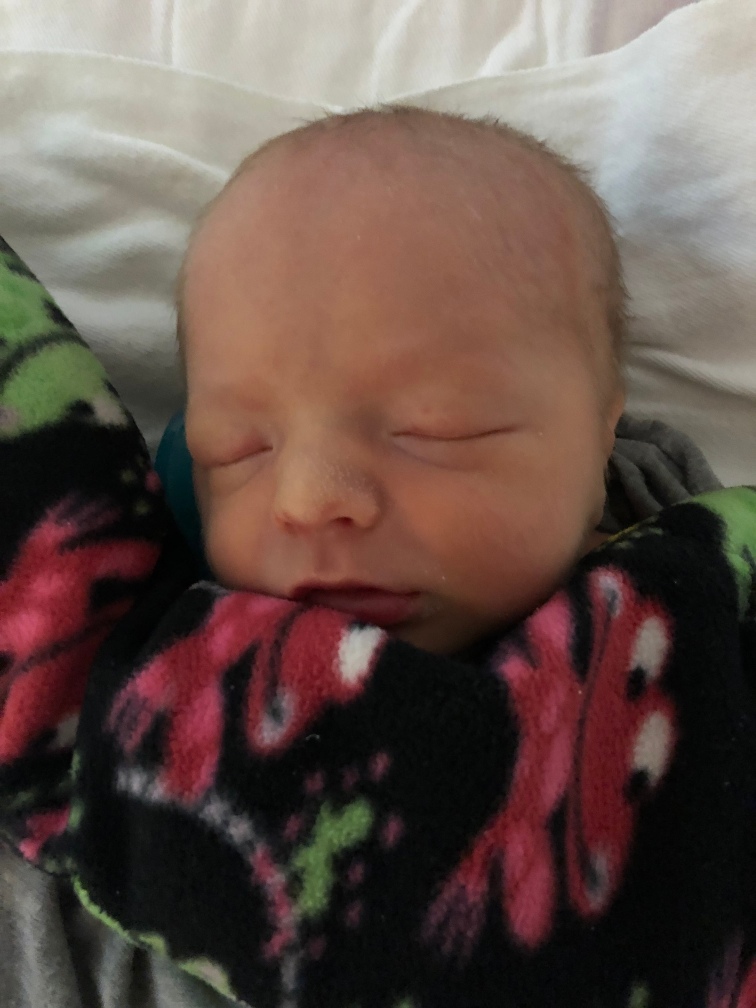 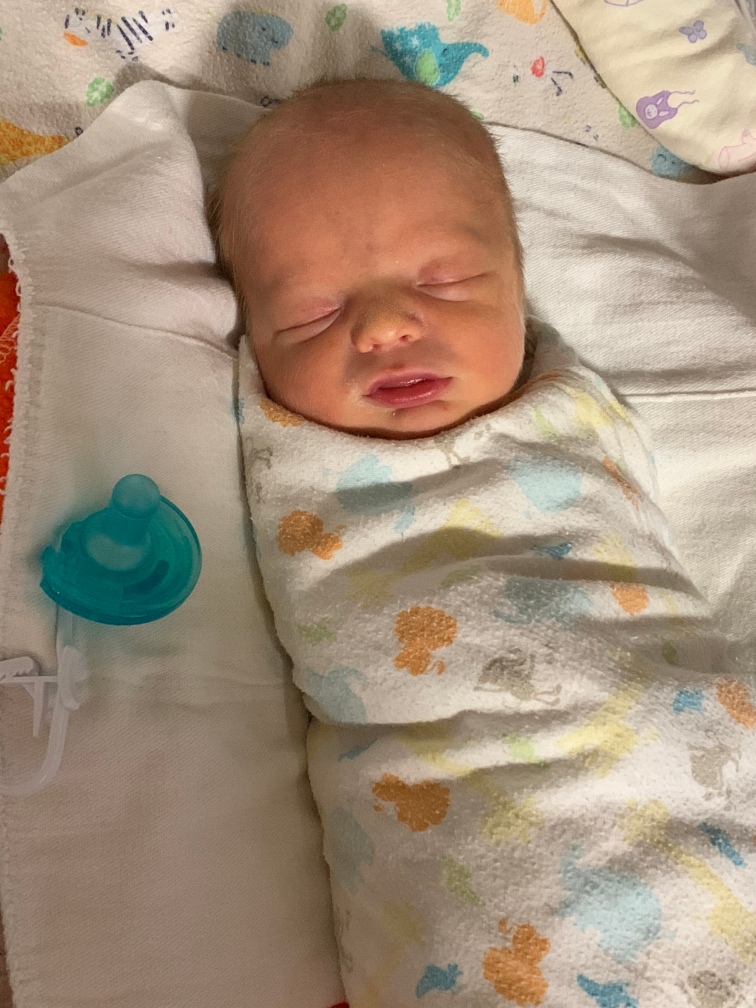 Riley was my rockstar. He made sure i remembered to pump, he kept my nipples lathered with lanolin so they didnt get dried out (hahahah) he washed all my pumping supplies when I was done, and would cheer me on when I would get more milk than my last pumping session. He had become my own personal lactation consultant. (No, but seriously. If you have any questions about nursing, riley probably has the answer LOL) He would get out of bed at midnight, with groggy eyes from no sleep, get the lanolin and hand it to me for my nipples. Thats what he thought about before bed was dry nipples hahaha kills me. 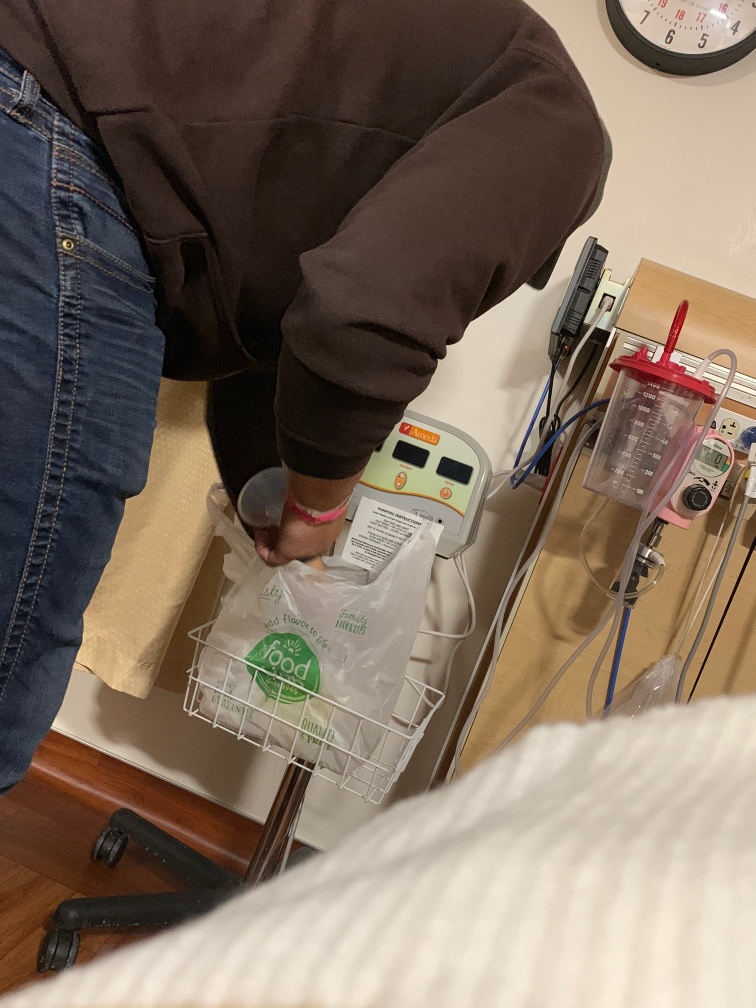 Nursing is so much easier when you have a team of people behind you, supporting you. It is no easy task and takes A LOT of determination.

We stayed Friday night in the NICU with McQuaid and planned to go home for one day Saturday just to see Hayven, check on the house & get the mail & stuff like that.

I woke up early Saturday morning and decided to go check on baby. It was so nice to be that close to him. I grabbed my pumped milk from the fridge to take with me.

When i got there the nurse practitioners were doing their rounds. And she asked if i had any concerns. I just told her, his heart rate keeps dropping when he is relaxing and I’m just hoping that isn’t going to make us stay longer because other than that and his episode there is no reason we are still here. His oxygen is fine, he has no IVs, and he’s eating.

It was so frustrating.

I got McQuaid out of his bed and was able to nurse him when his doctor comes running in.

He looks at me and asks what is wrong? I was confused. He treats every case like an emergency and i truly am so grateful for that. He was Hollands doctor when she was born. He is the smartest neonatologist and can figure out any issue in a matter of minutes.

Riley walked in minutes later and his doctor looked at us. “I don’t really see any concerns.” “I would still plan on being released tomorrow.”

After the doctor walks out Riley & I look at each other ‘we get to go home tomorrow?’ McQuaids nurse was like “i didn’t know you were leaving tomorrow.”

After talking with the doctor he didn’t really understand why we were still there. McQuaid just has a low resting heart rate and it doesn’t seem to effect him at all. 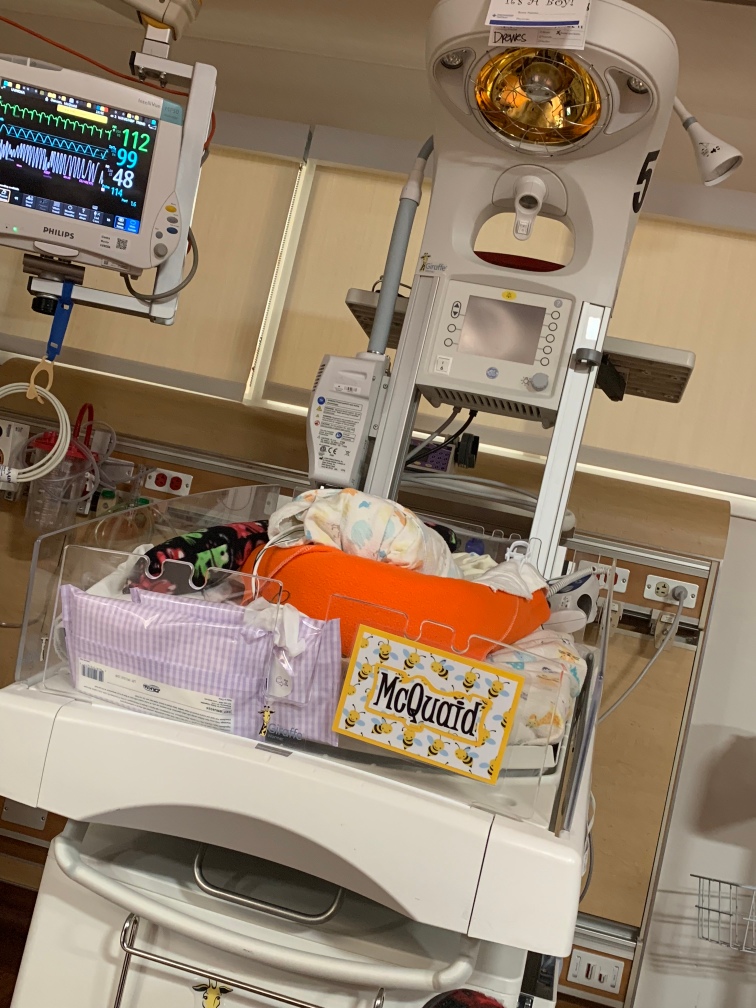 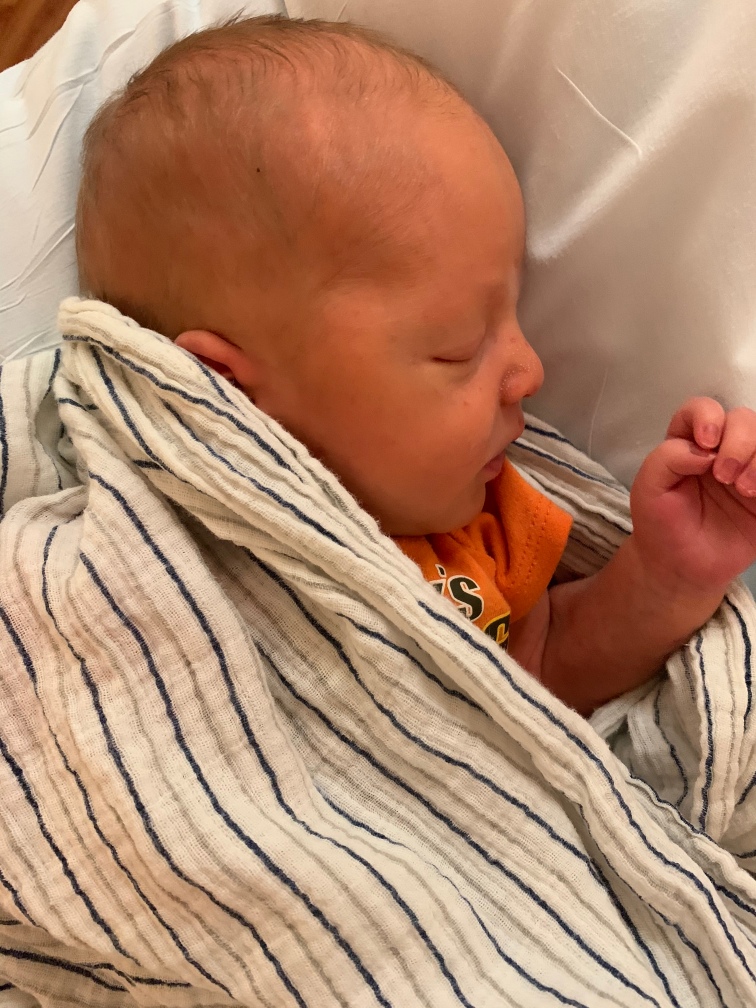 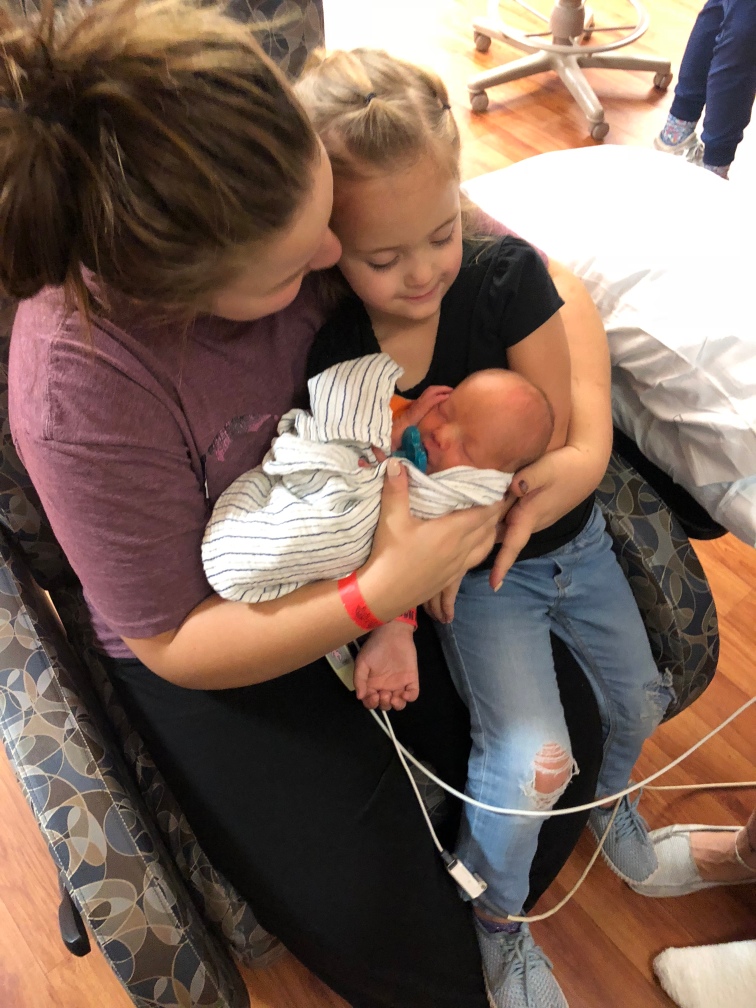 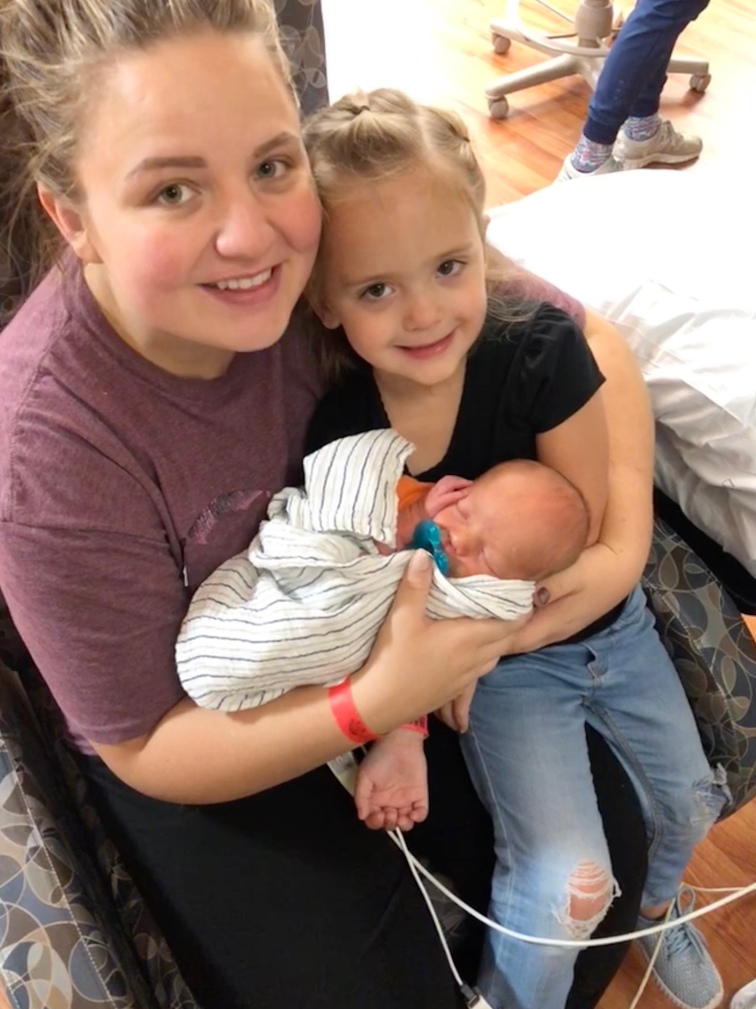 We packed our bags & went home Saturday night to see Hayven & get the house cleaned and ready for baby to be home!

We woke up early Sunday morning & got to the hospital at 8. There were a few tests we had to do in order to discharge from the NICU.

We fed the baby one last time, got him dressed, and loaded up the carseat & diaper bag. 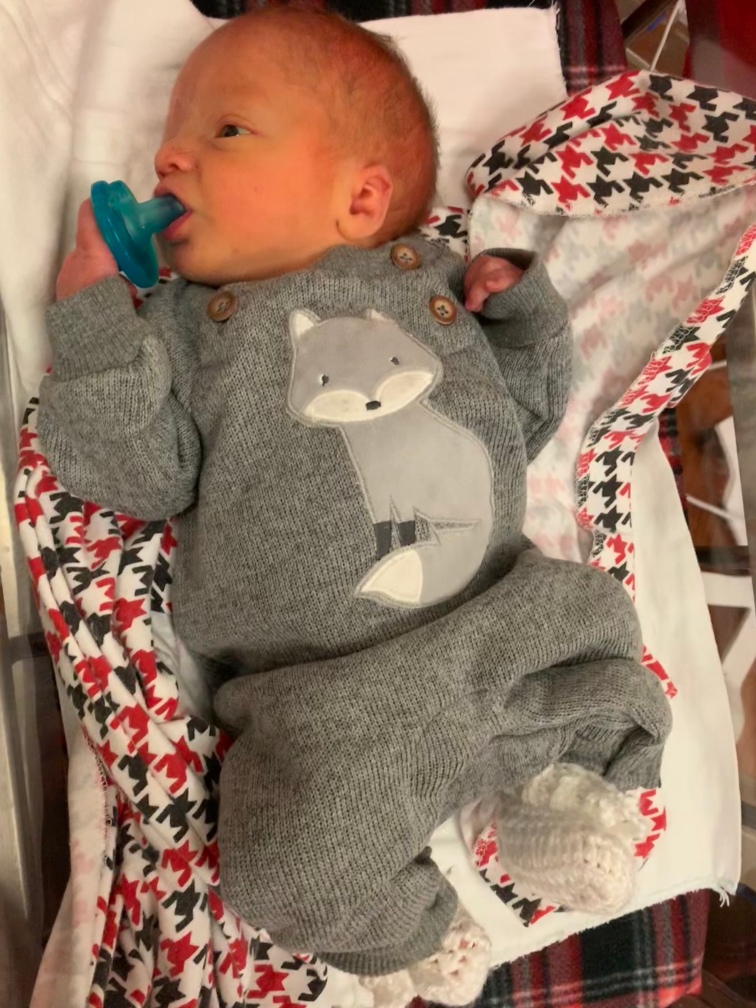 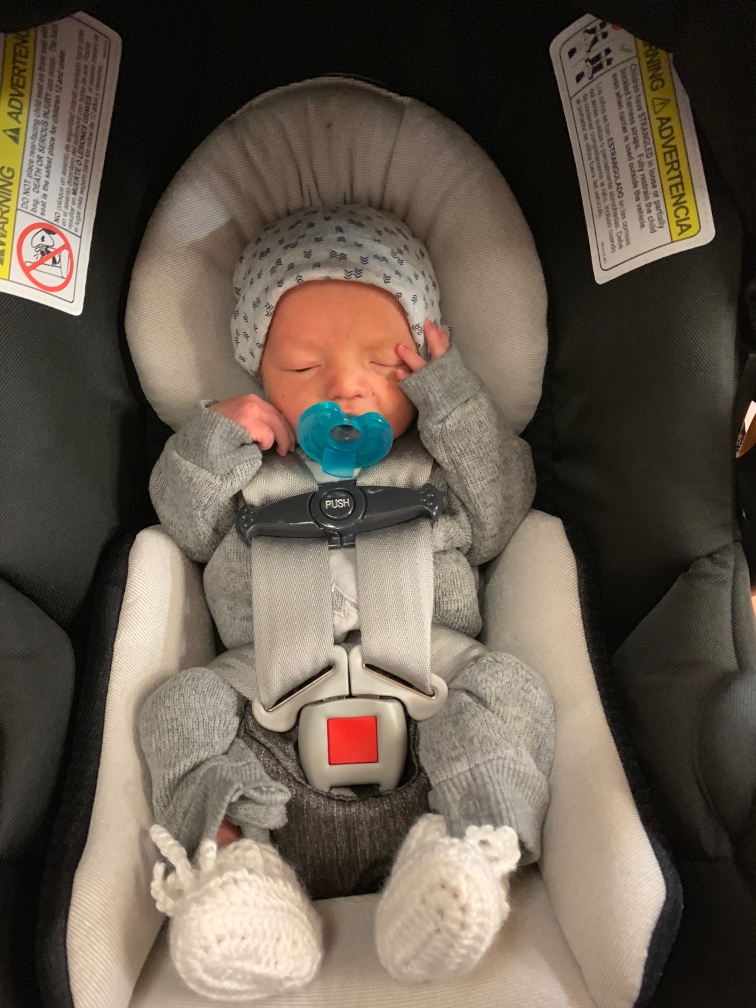 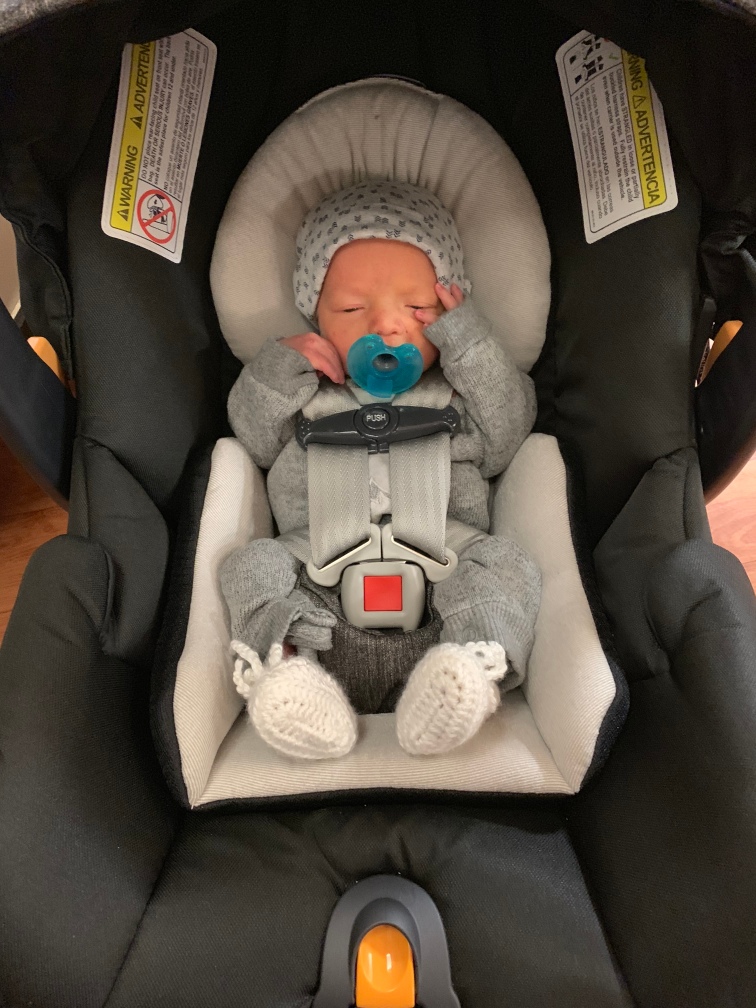 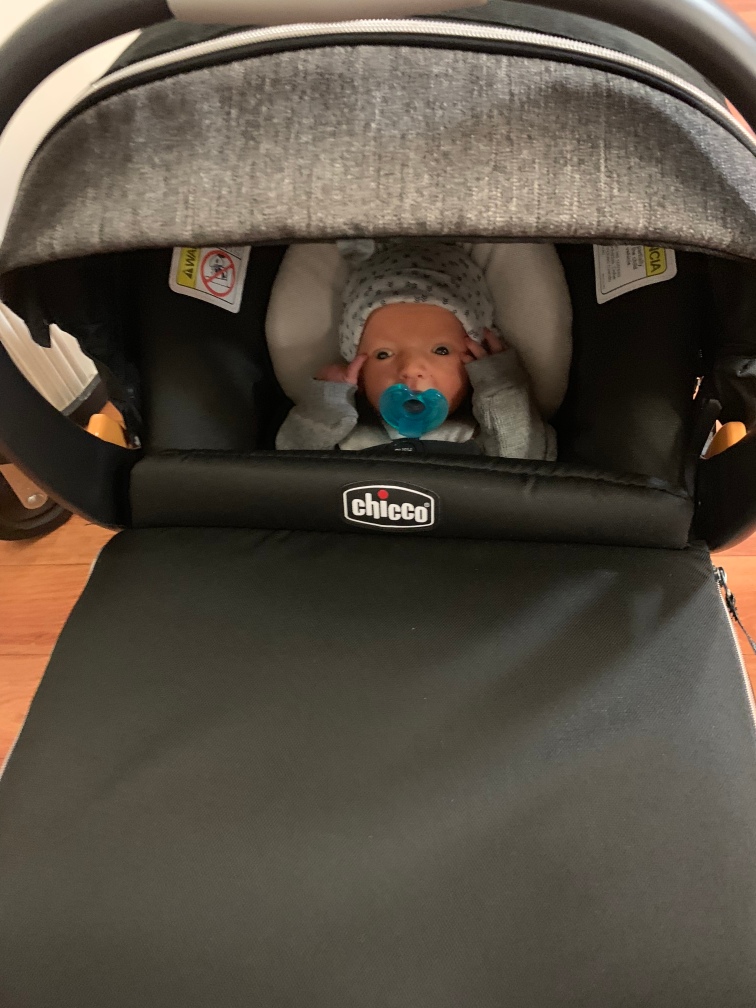 No more needles, no more machines, no more doctors (as much as we love everyone in the NICU we were soo ready to be home.) 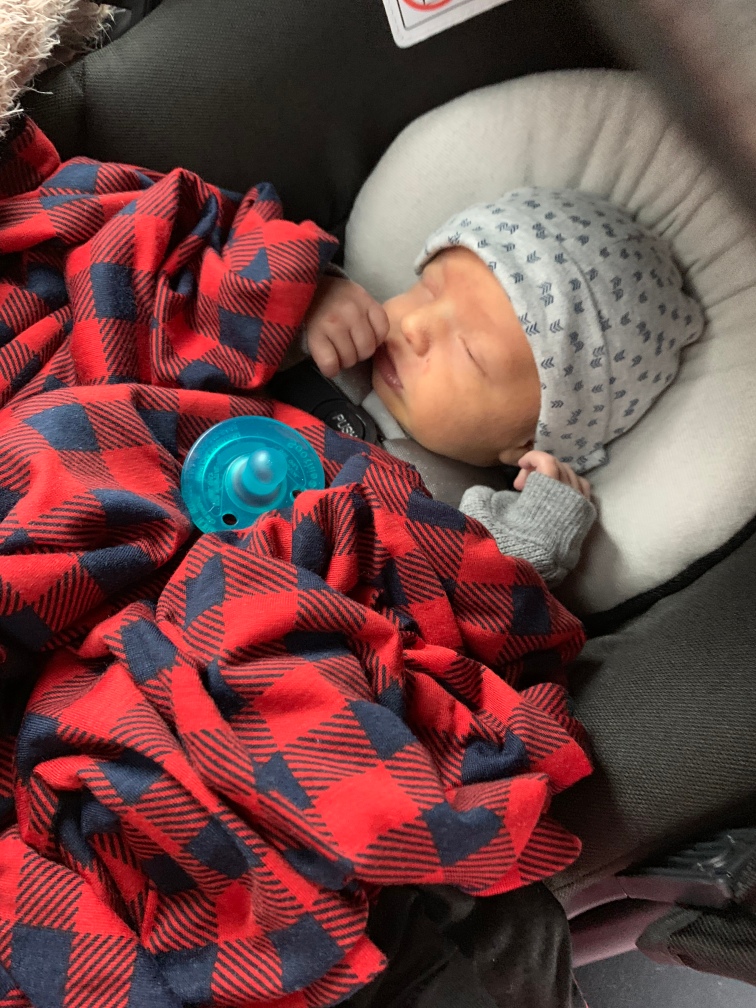 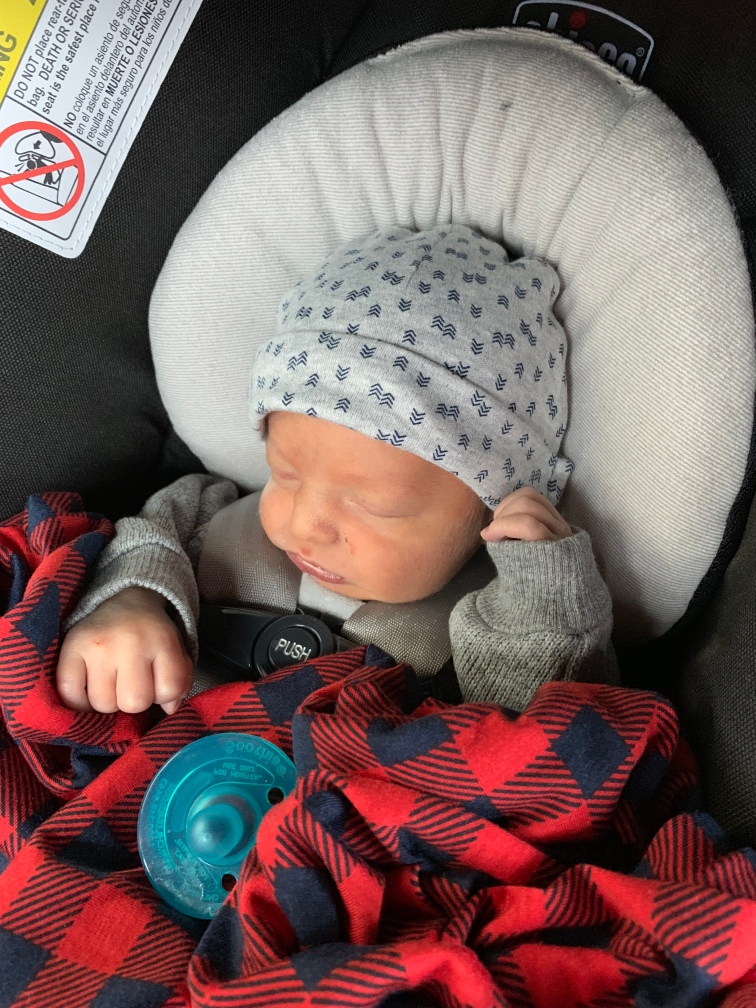 We snuck home without any family knowing. We wanted to surprise everyone. yet have a whole day to relax as a family of four. It had been a stressful 6 days. But so grateful it was only 6 days. 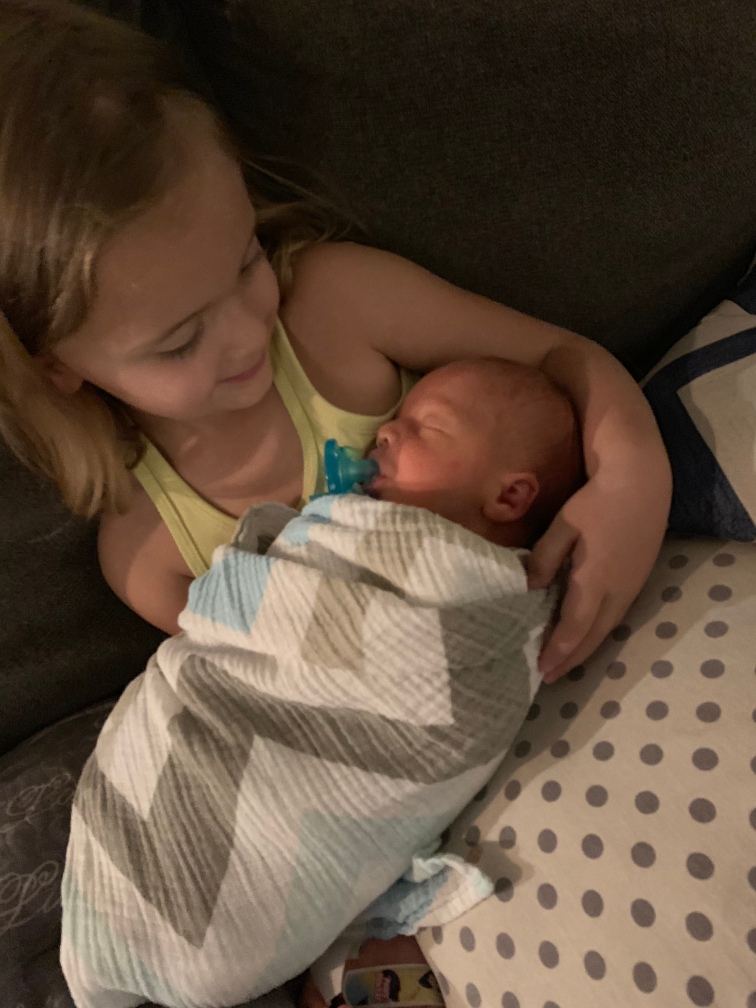 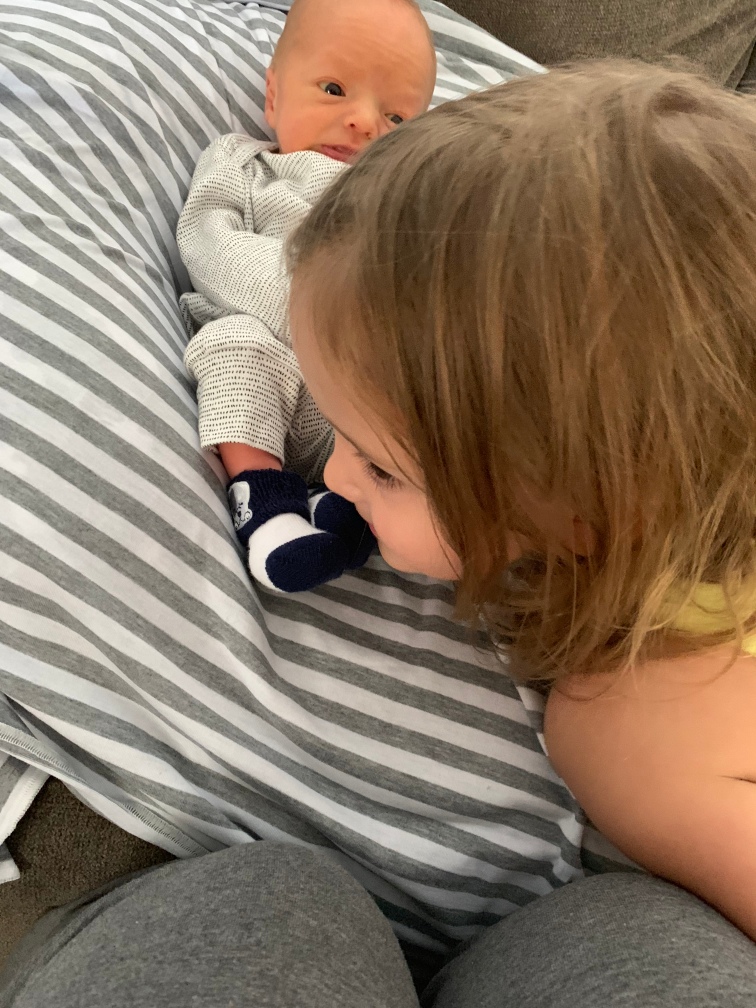 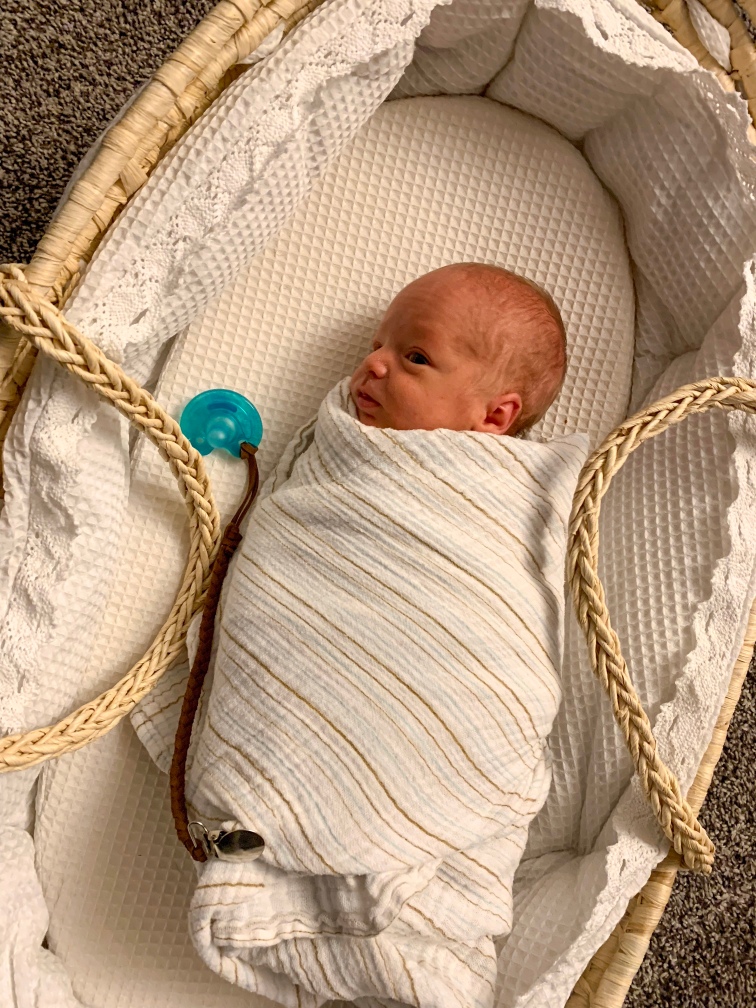 Hayven was & still is in heaven! She loves her baby brother whose name she can still not remember. LOL

McQuaid James is almost 7 weeks old & we are so smitten with him. He has been the best baby & sweetest addition.

I still don’t fully understand gods plan but as long as these two are in my life i wont question it.

This is a text widget, which allows you to add text or HTML to your sidebar. You can use them to display text, links, images, HTML, or a combination of these. Edit them in the Widget section of the Customizer.
%d bloggers like this: